Located in Pennsylvania, USA, Hersheypark is more than 100 years old and was originally built in1906 by Milton S Hershey for employees of the Hershey chocolate company. As of 2016, it has been wholly and privately owned by Hershey Entertainment and Resorts Company.

Hersheypark has won several awards, including the Applause Award.  As of 2018, the park covers over 110 acres (45 ha), containing 76 rides and attractions, as well as a zoo called ZooAmerica – North American Wildlife Park. Adjacent to the park is Hershey's Chocolate World, a visitors' centre attraction that contains shops, restaurants, and a chocolate factory-themed tour ride.

The park opened its first roller coaster in 1923, the Wild Cat, an early Philadelphia Toboggan Company coaster. In 1970, it began a redevelopment plan, which led to new rides, an expansion, and its renaming. The 1970s brought the SooperDooperLooper, an early complete circuit looping roller coaster.

SooperDooperLooper is a terrain roller coaster. The first drop leads directly into the vertical loop, which the train later passes through the centre of. This is followed by a tunnel and the ride finishes with a helix. Like other early Schwarzkopf roller coasters, the vertical loop uses a triangular lattice of steel tubes.

The trains on the SooperDooperLooper seat 2 riders per row, with each individual rider having their own locking lap bar to hold them in place, a common feature with Schwarzkopf looping coasters (and an upgrade Amusement Technical often makes). The coaster runs with two trains.

The control system upgrade made in 2012 didn’t meet the exacting standards and requirements of Hersheypark. The ride was running but there were issues with certain parts of the control which not where performing efficiently and consistently. This inevitably resulted in downtime on the ride and caused temporary suspension of operation on a regular basis. Ultimately, the ride was difficult to maintain and inefficient to operate.

Unlike many of the ride manufacturers, Amusement Technical offers a niche service in providing independent assessments of existing ride control systems and, if necessary, carries out upgrades. These upgrades can include replacement of obsolete equipment, bringing rides up to the latest safety standards or enhancing the ride control system.

Amusement Technical had an established relationship with HersheyPark having delivered two successful control system upgrades the previous year. It was a natural solution to outsource the ride control upgrade to Amusement Technical. 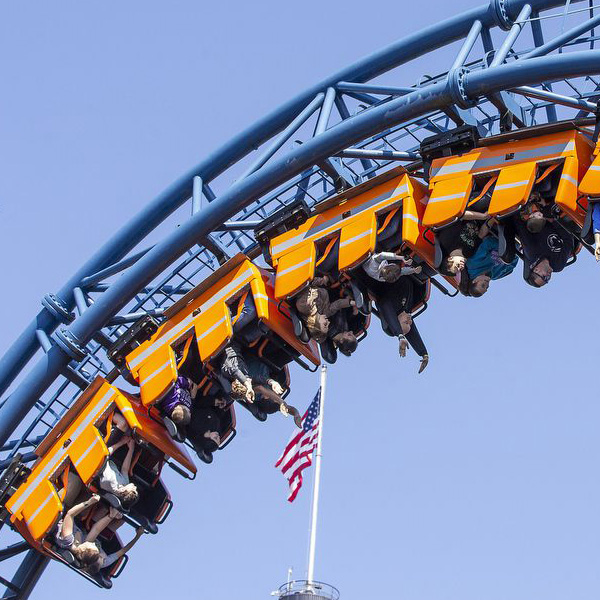 The legacy system had two plcs configured as a central processor for the ride control. The software and hardware were no longer supported by vendor warranties.  Additionally, the previous design approach adopted was perceived as obsolete and didn’t meet the relevant safety standard. Specifying the installation of an integrated safety control is now recognised as the most effective design protocol.

Hersheypark approached Amusement Technical with a brief to design and deliver a contemporary, reliable and safe control solution with software on a par with brand new rides. Hersheypark stipulated Rockwell software to be used.

When designing ride control systems, Amusement Technical aims to achieve a great guest experience whilst at the same time ensuring that members of the public are kept safe by means of robust safety measures. Amusement Technical systems are all designed to relevant safety standards, which can include ISO 13849, IEC 61508 and EN 13814.

Amusement Technical initially attended site to conduct a design risk assessment and complete a detailed system analysis. The next stage consisted of the creation of the proposed electrical design with schematics.  This was presented to the client and subsequently signed off to begin build of the panel and programming of software. Thorough factory acceptance testing was carried out before shipment to site to be installed.

Once on site the installation began. Thorough testing was undertaken, and the ride was then commissioned. From concept to completion Amusement Technical worked closely with the Park Safety Assessors to ensure smooth and successful State of Pennsylvania authorisation was obtained at the earliest possible opportunity

“We endeavour to provide simple and intuitive controls for use by the ride operators,” explains Sean Brian, Director, Amusement Technical.

“We worked alongside and trained the maintenance staff to ensure they had the necessary knowledge and skills to manage the ride control system and deal promptly with any system issues.”

The control system was designed and manufactured in the UK following ASTM2274, EN13814, EN6024, EN13849 standards. Since ‘go live’ there have been zero interruptions to operations due to the control system with it achieving 100% uptime.

“Hersheypark benefits from greater capacity with more cycles per day, less repair downtime and has the full support of components manufacturers, as well as Amusement Technical,” explains Sean Brian.

In common with most Amusement Technical installations the SooperDooperLooper benefits from the company’s secure remote access solution. Amusement Technical has a VPN and through its own cloud server the team can access the control for maintenance, diagnostics, minor modifications, and configurations.

In addition, Amusement Technical offers preventative maintenance services for the ride control system and access to our on-call engineers on a 24/7 basis to minimise ride down-time.